I must admit I never thought I would write one book let alone three so I’m both excited and amazed in equal measure at the publication of Frankel. 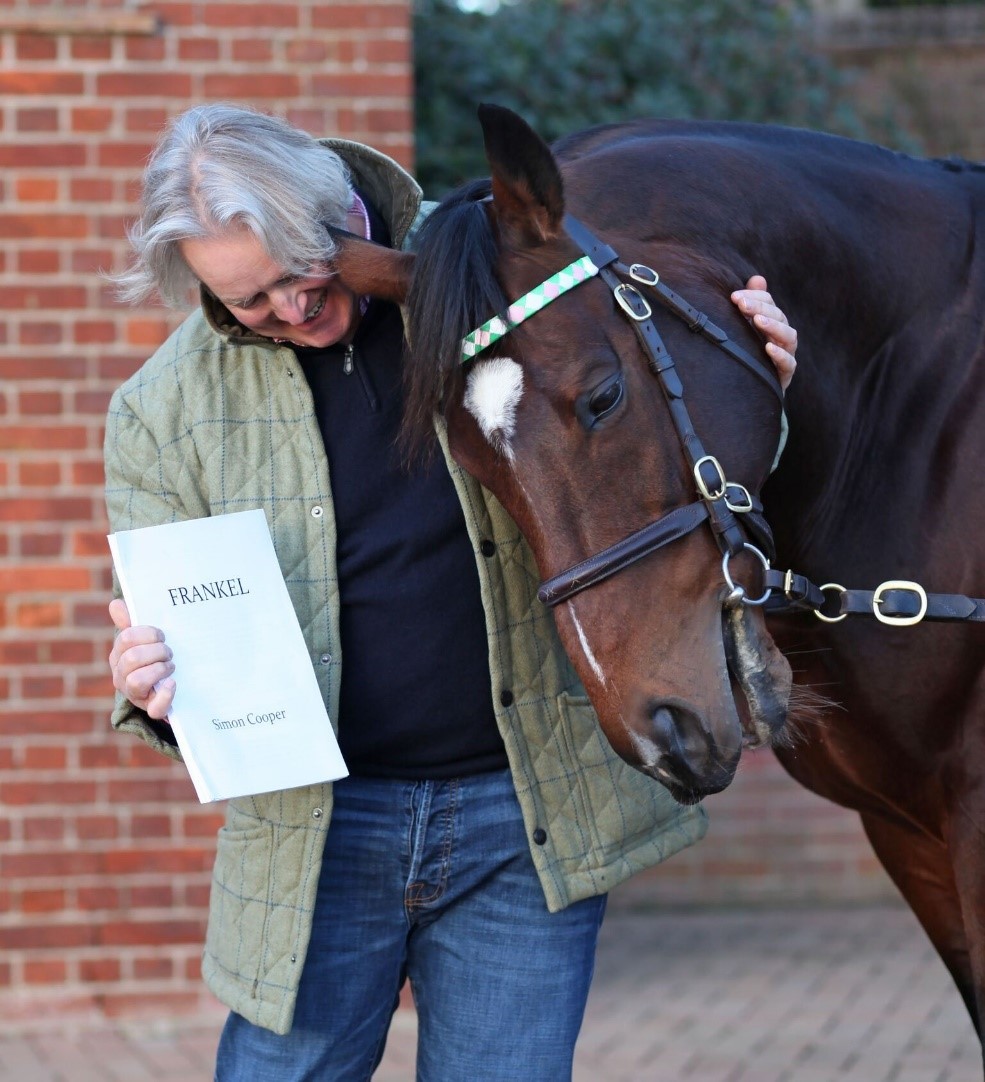 For those who know me through my work on the chalkstreams and nature writings a book about a racehorse might seem an odd departure but it tells you something more about my life when I actually had a proper ‘job’ and when fly fishing was simply my hobby.

As a teenager I was obsessed by horseracing; I was always rubbish at riding but racing fascinated me. Fortunately I came from a family who shared the passion. My grandfather had owned a racecourse. My grandmother encouraged an interest in betting on the grounds that it would help my maths. My father had ridden in point-to-points. The best family trips were days to the races. My summer job was as a stable hand in a local racing yard. But education got in the way until, with a degree to my name, I did what I wanted to always do – become a bookie. It was ten great years until the call of the wild got me.

So Frankel is something of a return to my roots. Like millions I watched in awe as this extraordinary racehorse scorched away all those in his path to become the greatest equine athlete of all time. I have met him. Patted him. Observed his foibles. Chatted in that way that people do to horses. And then retraced every step of his life from birth to his current home at Banstead Manor Stud in Suffolk.

He is an extraordinary horse who did extraordinary things. I hope you enjoy reading my tale of his life and the people that made him what he is.

About Frankel (published August 2020) buy from Amazon in hardback, paperback, Kindle, Audible and audio CD. Or scroll down for author signed copies.

“An imaginative retelling of the legendary story ….
Cooper paints a complete picture of Frankel.” The Racing Post 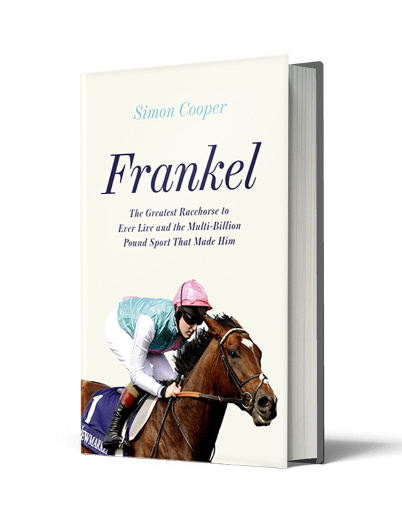 In horse racing greatness is defined by speed. Being the second fastest counts for little. You have to win. And win. And keep winning until every challenger of your generation is put to the sword. Of the twelve horses lined up on Newmarket Heath that 2011 day, one would do just that. And more. To become the greatest racehorse that has ever lived.

Frankel was born three years earlier on 11th February 2008, with four white socks and blaze, from impressive equine lines on both his parents’ sides. Simon Cooper revisits the whole of the horse’s life, giving readers an inside tour of the calm oasis that is life at a stud farm, where a foal will live with his mother for the first year of his life. Next, the atmosphere of heady possibility that marks the early days of training. Breaking in. Gallops. Trials. Turning raw potential into something more. Frankel begins to set himself apart.

A detailed and fast-paced narrative breathlessly recounts the racing career of the horse who, by his retirement to stud at the age of four, would be rated the greatest of all time. Cooper weaves the horse’s tale with his trainer battling cancer, the stable hands who coped with his explosive nature, the work rider who tamed him, the jockey who rode in all fourteen of his races and the owner who saw his potential from the very beginning.

The result is a rich and multifaceted tale of modern horse racing, the lives of everyone involved, human and equine, and the unadulterated glory of winning. And winning is everything.

Read the review The Independent

Read the review The Field

About The Otters’ Tale (published March 2017) ) buy from Amazon in hardback, paperback, Kindle and Audible. Or scroll down for author signed copies.

It is the best popular account of the lives of otters written so far.
Times Literary Supplement 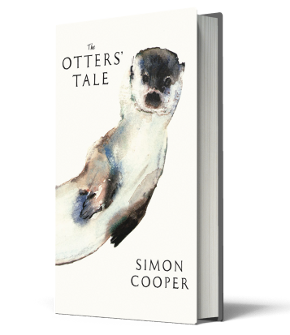 Otters hold an almost unique place in the animal kingdom of the British Isles, being one of the very few creatures that give birth once every two years. They are the most secretive yet also the most popular mammals – they are found in every county but are so rarely seen that they have been raised to mythical status.

When I bought an abandoned water mill that straddles a small chalkstream in southern England, little did I know that I would come to share the mill with a family of wild otters. Yet move in they did, allowing me to begin to observe them, soon immersing myself in their daily routines and movements. I developed an extraordinary close relationship with the family, which in turn gave me a unique insight into the life of these fascinating creatures.

I interweave the personal story of the female otter, Kuschta, with the natural history of the otter in the British Isles, only recently brought back from the brink of extinction through tireless conservation efforts. Following in the footsteps of Henry Williamson’s classic 1920s tale Tarka the Otter, you are taken on a journey through the calendar year, learning the most intimate detail of this most beautiful of British mammals.

Here are some of the very kind reviews and comments about The Otters’ Tale:

“…. an amiable story of a family of otters that take up residence in his water mill.”

“Cooper writes in this splendid book about otters in general but particularly about Kuschta a female.”

“Well written and lots of information about otters combined with a story which makes absorbing all the information an interesting read.”

About Life of a Chalkstream (published May 2014) buy from Amazon in hardback, paperback, Kindle, Audible and audio CD. Or scroll down for author signed copies.

Simon Cooper writes as well as he casts – Country Life 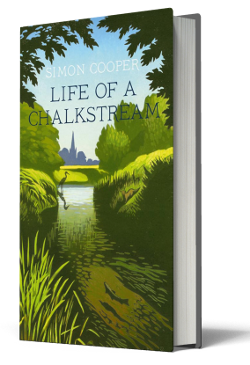 Life of a Chalkstreamis the story of a river that I discovered and brought back to life. A beautiful English chalkstream neglected for a generation or more. But perfection comes at a price, and the book charts the highs and lows of the year I took to bring it back from the brink. This is not so much a tale about people (they are mostly bit players as the events unfold) but rather the creatures that make their lives in and around the river and how the changes affected them for better or worse.

Come with me as we see the river fill with salmon and eels, returning from years at sea and a journey of thousands of miles across the Atlantic Ocean. Watch as those efficient predators the otters, pike and herons show themselves to deadly effect. Follow the adventures and travails of the fly fishers who take their turn on the river. In the air the swallows mark the changing of the seasons. By night the owls hover over the water meadows, a hunting ground that rarely fails to give up a victim. By day the water voles and tiny mammals scurry in the dry grasses and tall banks, making families that live life on the edge.

This is not just the tale of a river but the community that lives by it. How every creature, however big, small, fast or apparently unimportant has a niche and a role in the life of a chalkstream. But all is not as it should be. After decades of neglect much must be done to prevent the river spiralling towards oblivion. Saving it will be no easy task.

These are just a few of the great reviews:

“Beautifully written and steeped in a true understanding of its subject.”

“If you fish for trout and grayling, or if you love the English countryside, then you'll also love this book which, for me, ended too soon.”

“Pastoral and modern, it will interest naturalists, anglers and daydreamers.”

“Up there with Tarka the Otter for the marvellous river and nature writing.”

If you would like to receive news of further upcoming events please register for my Newsletter here.

I have copies of Frankel, The Otters’ Tale and Life of a Chalkstream that you may buy signed or unsigned.

To buy on-line use

If you wish to contact me by letter my address is :