NEWS FOR THE AUTUMN

You can view the following PDF files with Adobe Acrobat.

An evening on the Bruton stream

The way forward for our rivers

Catch a whiff - there may be something in the water

Fishing in the shadows of Royalty

Identity Crisis - What constitutes fly-fishing in the modern world?

A Passion For Angling - at Avon Springs

Don Stazicker cracks the Frome code on the Wrackleford Estate

A new Mayfly species is discovered

The true cost of water

Wild At Heart - Is the end in sight for stocked fish in rivers?

How Covid-19 is affecting the fly fishing business

The year of Covid-19

Of Fish and Foe.

Food is our Friend.

Banging on about Beavers.

A multiplicity of rules.

High summer on the Avon.

The art of weed cutting.

Utopian dream? - The need to stock our chalkstreams

The love of Mistletoe

Unintended consequences - The spread of crayfish

The meaning of fishing

Is catch & release as ethical as we think?

Who should protect our rivers?

Who should protect our rivers?

In fear of the killer shrimp

How will moves to counter climate change affect our rivers

How we should use the rain to save our rivers

Photo essay of the chalkstreams

Mysteries of the mayfly

Dry fly dreams: A day at Exton Manor Farm on the River Meon

Do fish have rights?

Another brick in the wall

The indomitable nature of trout

Simon on harsh times for grayling

When the locals go fishing

Simon Cooper on why you should never linger in bed

Angling correspondent Brian Clarke is unimpressed by the Mop Fly.

Anglers can clean up with ‘mop’ fly that fish find irresistible but where is the fun in that?

Fly fishing renegades are cleaning up in competitions—with kitchen mops

Fishing after dark. Read Simon Cooper tale of a night on the river

In search of wild 5lb trout on the River Frome.

Editor Andrew Flitcroft charts his two attempts at the One Fly.

Simon Cooper tells of how good came from the winter floods

A look at FM Halford, father on dry fly fishing, on the 100th anniversary of his death

Simon Cooper ponders on why we fly fish and in particular the 100th anniversary of the death of F M Halford, father of modern dry fly fishing.

Editor Andrew Flitcroft picks his” Wish you were here?” chalkstream

Catching the evening rise on the River Nadder

Simon Cooper on the magic of Mayfly

Chris Tarrant on his winning day and winning ways.

About the 2011 River Test One Fly contest.

About the 2011 River Test One Fly contest.

A member of the winning 2011 River Test One Fly team shows you how to tie the fly he used.

"Learn In The Cradle Of Fly Fishing" at Fishing Breaks!

A Guides eye view of the 2009 River Test One Fly

Editor Jonathan Young recounts with great hilarity the how his team lifted the trophy.

David Profumo tells all from the River Test One Fly competition

The county boasts about its famous River Test

Trout and Salmon Magazine May 2008

Fear of Flying – The FT’s Richard Donkin tells why he is fishing the River Test One Fly in April.

Buy a Chalkstream Day – The Field show where to book a day in paradise.

Andy Buckley on the River Itchen at Kanara - 2020

Andy’s partner Ivena catches a brown trout of a lifetime

Andy Buckley on the Upper Test at Bullington Manor – 2020

Glorious autumn on the chalkstreams

Homage to a chalkstream summer - 2016

A perfect summer day on the river

Our rivers as you have never seen them before 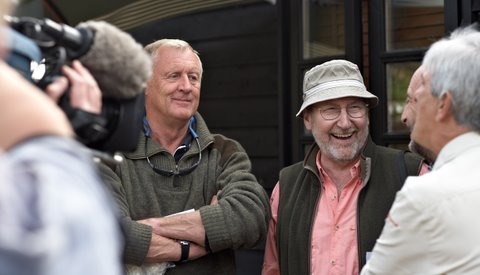 See the leading chalkstream anglers and guides in action