COVID-19 UPDATE
As you would expect, we have put in place safety measures at all our locations and for all types of fishing day.
If you have any questions or particular concerns, please do not hesitate to contact us.  Click here for our 2021 Covid-19 policy.

But more than that they are engaging and informative companions on the riverbank, blending information, hints and anecdotes to help you get the best from the day. They will know the best local pub for lunch, transport you from hotel to river if required and carry a full stock of flies, tippet material and chalkstream outfits.

The Guides are available for hire by the day; the daily fee covers all the extras, including flies. All we ask is that you tip the Guide at the end of the day if everything has been to your satisfaction. Sharing a Guide amongst your party is absolutely fine; we recommend a ratio of one Guide to two fishermen.

Our Fishing Guide fee includes all of the following: 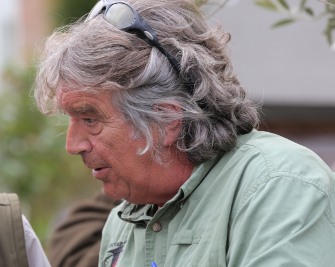 Of all our Guides Tony King has to be the most travelled having caught a fish (species unspecified!) in every continent of the world. Equally at home with a salmon, trout or saltwater rod in his hand, Tony is a highly accomplished fly fisher with a natural eye for teaching. He covers all the disciplines running our saltwater and salmon classes and specialises in guiding on the Dorset streams.

Born and raised in the south, Tony now lives in Weymouth, Dorset overlooking Portland Bill with one of the best vantage points for the sailing during the 2012 Olympics. 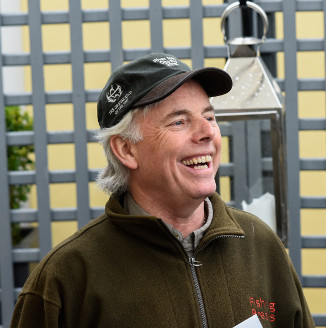 John Stephens was born close to the banks of the River Avon at Salisbury Hospital in Wiltshire, the river on which he caught his first trout on a dry fly at the tender age of ten. He spent his formative years on the Avon at a time when Frank Sawyer, inventor of the Pheasant Tail Nymph, was still active. As a young boy John frequently met Sawyer but never realised the legend that Frank had become by that time.

First fish: A mullet in Spain
Most memorable fishing day: Catching my first trout on a fly (a dry fly!), when I was about 10 years old on the river Avon at Enford in Wiltshire
Dry fly or nymph: Dry fly
Item of fishing tackle to send to Room 101: 99% of flies sold
Best fishing joke: Q. "What time do the fish rise?" A. "Before you arrive, after you go home and sometimes at lunch time depending on whether you go to the pub or not." 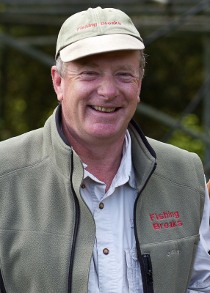 Mark spent his working life in the Lloyds insurance market before making a career changing decision by moving to Dorset where he divides his time between guiding, beating and helping out on the river. Born in Germany, Mark learnt his fishing with his father on the River Itchen with his formative years spent on the banks of the River Avon, which likely explains his favourite book and prowess with a nymph.

Earliest fishing memory: Fly fishing with my father on the Itchen
Dream fishing destination: Patagonia
Dry fly or nymph: Dry fly
Most memorable fishing day: First salmon on the Spey
Favourite fishing book: ‘Keeper of the Stream’ by Frank Sawyer
Favourite film: Tin Drum
Favourite food: Shellfish
Best fishing related joke you have ever heard: With apologies to Tommy Cooper; “Two fish in a tank. One said to the other I'll steer, you man the gun...”

It is fair to say that Bob probably knows the Berkshire chalkstreams as well as anyone alive that being his ‘patch’ as it were for more than 30 years whilst working as a Fisheries Officer with the Environment Agency. Bob is truly a walking encyclopaedia when it comes to the any questions on our native fish species.

He is a passionate fishermen; you will find him out in all weathers and he is always exploring new places to fish. Bob has something of a reputation of a heron, spotting fish nobody else has seen, so prepare to catch fish in places you wouldn’t think possible. Every year he travels back to his native Austria returning with photos of the gorgeous rivers and some truly unusual fish. 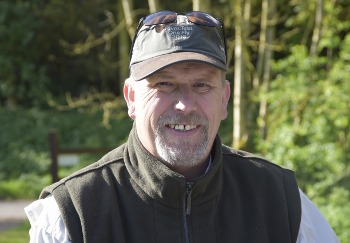 Steve has been fishing since the age of five and started with his grandfather on the beaches of the Solent catching plaice. Since then his passion for fishing has spread over many disciplines pursuing carp, barbel, grayling, trout, salmon and bass.

However his true love is fishing on small chalkstreams for wild brown trout with a short 3wt rod and a dry fly. Steve is also a part time river keeper for the Portsmouth Services Fly Fishing Association and is the Chairman of the Hampshire river keepers association.

Earliest fishing memory: Catching my first grayling at the age of 6
Dream fishing destination: Maldives for bonefish
Dry fly or nymph: Dry Fly
Most memorable fishing day: Salmon fishing on the Isle of Harris with my son as the ghillie
Most memorable catch: 16lb pike on the Fly
Item of fishing tackle to send to room 101: A "Fly" called the Blob, but it's not fishing.
Favourite film: Saving Private Ryan
Fishing hero: My Granddad
Favourite food: Indian or Thai
Favourite fishing book: Mr Crabtree Goes Fishing

Malcolm can boast that his first ever fish was a childhood salmon; admittedly a salmon parr on a spun worm from the River Roe in Northern Ireland but a salmon nonetheless. However, it wasn’t until much later in life when on holiday beside Loch Awe in Scotland with his three young boys to entertain that Malcolm was bitten by the fly fishing bug when they all gave it a try at a small trout fishery.

Back in southern England where he had settled, pursuing a career in computer systems, Malcolm followed up with more success at Rockbourne Fishery on the edge of the New Forest before spying the value of the Salisbury & District Angling Club, of which seventeen years later he is still a member.

Malcolm was one of the founder Guides at the inaugural River Test One Fly in 2008 and was Confederation Secretary for the England fly fishing team. He is now retired from computers with guiding his passion and daily work.

Earliest fishing memory: Walking back from Lough Foyle in Northern Ireland with two flounders in my hands at 9 o’clock at night, only to be met by my two worried parents. I had fresh-caught fish and bread and butter at 10 o’clock that night.
Dream fishing destination: Tjuonajokk Northern Sweden for Arctic Grayling
Dry fly or nymph: depends on what is catching.
Most memorable fishing day: First day at Tjuonajokk – first cast 53cm Grayling on the fast running River Kaitum.
Item of fishing tackle to send to Room 101: Snake flies or Mop flies – I cannot decide which.
Favourite film: Star Wars IV
Favourite food: Pomegranate glazed slow cooked shoulder of lamb.
Best fishing related joke you have ever heard: Wife after returning from fishing trip with husband to neighbour: "I did everything all wrong again today -- I talked too much and too loud. I used the wrong bait. I reeled in too soon and I caught more than he did." 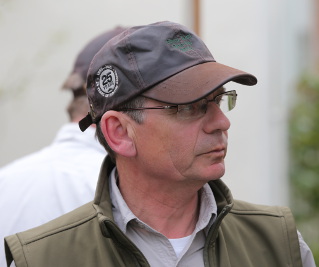 Ian was brought up and has lived the majority of his life on the Hampshire coast. He qualified as a chartered accountant in London and worked for many years in business. More latterly he had his own financial consultancy until the lure of moving water prompted early retirement from all that.

He has been fishing most of his life and in the last 15 years has concentrated almost exclusively on fly fishing. He is passionate about fly fishing and also enjoys passing on new skills and techniques to clients. He is equally at home fishing for trout and grayling on the southern chalkstreams or fly fishing for bass at the western end of the Solent close to his home. When Ian is not fishing you will find him sailing – so he obviously has a thing about water!

Earliest fishing memory: Catching roach on the Norfolk Broads on a family holiday, age 5.
Dream fishing destination: Hmmm – any pristine bonefish flat or New Zealand??
Dry fly or nymph: Dry if practical.
Most memorable fishing day: Nearly every fishing day is a memorable in some way but the one when I caught a 7lb bonefish was special.
Item of fishing tackle to send to Room 101: Braided loops
Favourite Film: Master and Commander
Favourite food: Fisherman’s Pie!
Fishing hero: Not really a hero but it all started with Mr. Crabtree for me – so Bernard Venables
Favourite fishing book: The Longest Silence – Thomas McGuane
Best fishing related joke you have ever heard: Fishing is far too important for jokes but if you insist: Two parrots sitting on a perch. One says to the other: ‘Can you smell fish?’ 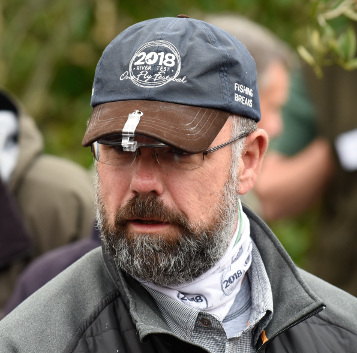 Kris is the newest recruit to Fishing Breaks, though it must be said he hasn’t moved far to join us: he previously worked for Orvis in Stockbridge and actually lives in Nether Wallop.

His fishing education began on the muddy ponds of Berkshire and chasing dace on the Kennet & Avon Canal having been born and raised in Reading. His father was always his fishing mentor. A real old countryman who instilled in Kris a love for the countryside and all things fishing though in those formative years the closest he came to a chalkstream was plucking bullheads from the nearby River Pang.

Like many of us fishing fell by the wayside for Kris in his 20’s but in his 30’s when he next picked up a rod it was fly one when he lived and worked in Yorkshire, honing his new found skills on the Aire, Wharfe and their like. When work returned him south the chalkstreams where a natural progression for a man who likes nothing better than fishing a dry fly. In time his hobby has become his profession as Kris, in addition to his daily office duties, is a qualified instructor and experienced guide.