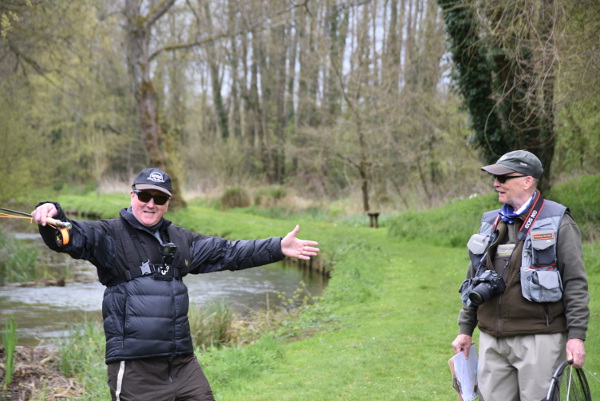 Struan Wallace’s sorry tale, as witnessed by guide Malcolm Price, of the one that got away.
View the 2021 One Fly photo gallery

The One Fly Festival is a bi-annual celebration of everything that is great about fly fishing on a day in late April that marks the opening of a new season on the chalkstreams.

The 2020 contest was postponed, falling as it did in the first Covid-19 lockdown but fortunately by the time 2021 came around fishing had a window of opportunity. So, with six teams, the One Fly was able to go ahead with the draw and awards conducted by Zoom, which though efficient is not exactly in the social spirit of the One Fly.

Top billing in the awards has to go to the Wherwell Priory team of Mike Corner-Jones and his guide Michael Taplin who caught an amazing 59 fish, many of which were small wildies, that gave them the Top Angler & Guide Award for which they both get a trophy and Michael a cheque for £500. Mike’s 1505 points, nearly double that of second place Ed Burgass at Orvis Kimbridge, assured his team the Hare’s Ear Trio of the Winning Team Award as it did for Wherwell Priory who picked up the Top Estate Award.

Away from the River Test, Charles Jardine and his guide Steve Batten picked up the Largest Fish Award with a 25” brown from Avon Springs on the River Avon. Nearly everyone fished a nymph on the day, which was cold with a north easterly keeping down the hatch, but two intrepid souls, Piers Bingley and Ian McKenzie, tried a dry with Piers just shading Ian for the Dry Fly Award.

The final mention in dispatches has to go to the Minley Manor Moustaches who gallantly received the Duffers Delight Award for the lowest scoring team proving the fickleness of the One Fly since it was, they who were the outright winners in 2018.

Our thanks to all those who helped make the One Fly possible. Nick Parish Guide Caption, Diane Basset and Kris Kent for the organisation, all the owners who kindly donated the beats and everyone who took part. We raised a good-sized cheque to our chosen charity, the Alex Lewis Trust. 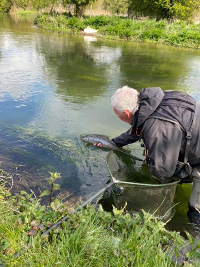 The River Test One Fly is hosted by kind invitation of Lucy Townsend and all the team at The Greyhound Inn in Stockbridge. The One Fly is open to all-comers as teams of three or individuals. The fishing day runs from 10am-4pm, with a welcome breakfast and beat draw taking place at The Greyhound at 8.15am with the prizes handed out over tea at 5.30pm. All fish are released and all competitors are accompanied by a Fishing Guide who acts as guide, scorer and confidante.

About the One Fly

The idea for the River Test One Fly was conceived by Fishing Breaks founder Simon Cooper having competed in the American equivalent since 2005. Though he has never come close to winning, every year Simon makes the 5,000 mile trek to Wyoming with ever increasing excitement. For this is a contest that pits man against man and fish against fly – it is an unequal contest as the trout always win, but you can share the passion of one of the world’s truly great fly fishing events which is now held in England, the home of fly fishing.

But the clue to the difference to other fly fishing tournaments is in the name - the One Fly is exactly that – at 10am every competitor selects and ties on the fly that must last all day – lose it and you’re out! Points are awarded on a sliding scale according to the number and length of fish caught. There are no cash prizes – just the glory and kudos of winning.

If you are interested in entering a team or an as individual please email us.

Individual entries will be allocated a team by the organiser. Any special requests will be fulfilled if possible. For team entries names may be changed/left open until 28 days prior to the competition. The cost of entry is £350/person. The organiser will contact you for payment.

The One Fly could not happen without the help of a great many people - apologies to anyone accidentally omitted.

Click here to open PDF of the rules and scoring