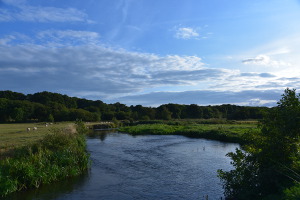 A chalkstream salmon on the fly has always been high on the totem of fishing bragging rights and there are few better places to achieve this than on the Dorset Frome.

The lower sections of the Frome have historically been highly regarded for salmon and sea trout fishing both in terms of size and quantity; at one time the river held the record for rod-caught sea trout in the British Isles. It is also a river where both species rise to the Mayfly in late May and early June.

The opportunity for a record English fish in modern times is perhaps not as fanciful as you might suppose; in 2013 a fish of 135cm, estimated at 50lbs in weight, was photographed passing through the fish counter at East Stoke. It was subsequently hooked and lost, possibly twice

Sea trout have a long season on the Frome from April 15 to October 31. The salmon seasons starts a month earlier on March 15 but closes on August 31. All fish must be released. The best time to fish is from late afternoon until dark. The fishery is divided into two beats for one to three Rods in total.

Rods are available in two formats: sea trout and salmon day rods or a day/night pass which includes trout fishing at Ilsington (11 miles) with the option to stay in the Eco Lodge. Click here for more details of the Eco Lodge.